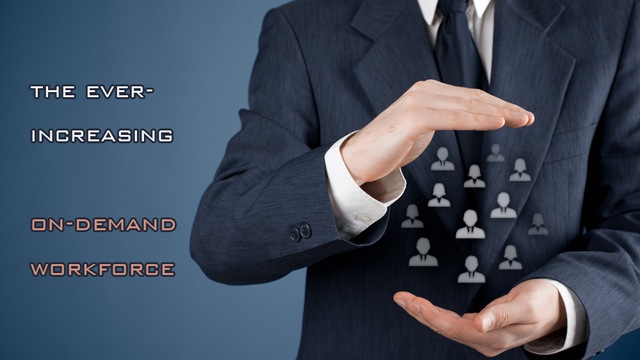 Some researchers estimate that by 2020 as much as 40 percent of the American workforce will be made up of contingent workers, which includes temporary employees, independent contractors and project-based on-demand workers.

Josh Wright, chief economist for recruitment software company iCIMS, based in Matawan, N.J., said that while the pursuit of short-term, project-based freelance work is not new, the ability to centralize this type of work and give freelancers access to potential clients through online apps has led to an explosion of the practice.

According to Mulrooney, the two key drivers responsible for the rise of the on-demand workforce are workers’ demand for diversity and flexibility in their roles and a shift in organizational strategy from needing to hire a person to needing to complete a task.

Wheeler explained that, historically, recruiting focused on full-time regular hires or temporary hires. Gig hiring—such as when retailers ramped up headcount during the annual holiday season—fell under purchasing or procurement. “TA was unaware that those people even existed,” he said. “The TA function had been insular, focused on growth or replacement. Many colleagues in TA have told me they are now looking at taking over gig workforce hiring as a part of their responsibilities.”

Determining the optimal workforce composition will be a core competency for HR and TA functions going forward, Wheeler said. “HR will be asked to help determine which positions should be full time and which should be done by contractors, or staffed by third-party agencies. We’ll see a shift to contracting with more niche expertise workers as needed instead of hiring full-time generalists to all-purpose roles.”

The growth in recruitment process outsourcing (RPO) firms will also continue. “Agencies will have to include RPO or they will not survive, except a small sliver of executive search firms,” Wheeler said.

But Andrew Chamberlain, chief economist for employer review website Glassdoor, is pushing back on speculation about the growth of the gig workforce. “Without a doubt, there has been massive growth in the gig economy in recent years. But growth in gig work will likely trail off in 2017 and beyond as reality sets in about the actual pros and cons of contract work—both for workers and employers,” he said.

Chamberlain explained that using contract or gig workers allows for flexibility for workers and cuts overhead costs for employers, but “it only works for relatively simple jobs that are easy to measure.”

He said that skilled work in professional services, technology and finance increasingly require deep institutional knowledge, trust, reputation and personal relationships inside the organization. “These jobs have many intangible attributes that are hard to measure, making it hard to carve them up in pieces, each with their own contract written to specify exactly what will be delivered. For that reason, the gig economy is likely to remain a small, although important part of the U.S. labor market.”