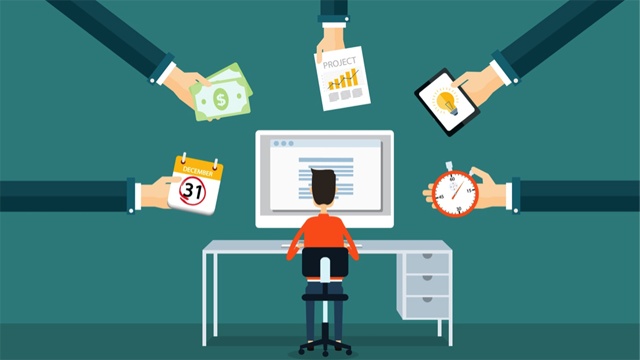 Gig economy：A gig economy is an environment in which temporary positions are common and organizations tend toward hiring independent contractors and freelancers for short-term engagements instead of full-time employees. （Gig economy类同于按需经济，是指临时工作相当普遍、企业开始倾向与个体工作者签署短期劳务合同的一种经济形态，Gig economy亦被译作“零工经济”。）

The trend toward a gig economy has begun. A study by Intuit predicted that by 2020, 40 percent of American workers would be independent contractors. There are a number of forces behind the rise in short-term jobs. For one thing, in this digital age, the workforce is increasingly mobile and work can increasingly be done from anywhere, so that job and location are decoupled. That means that freelancers can select among temporary jobs and projects around the world, while employers can select the best individuals for specific projects from a larger pool than that available in any given area.

Digitization has also contributed directly to a decrease in jobs as software replaces some types of work and means that others take much less time. Other influences include financial pressures on businesses leading to further staff reductions and the entrance of the Milennial generation into the workforce. The current reality is that people tend to change jobs several times throughout their working lives; the gig economy can be seen as an evolution of that trend.

In a gig economy, businesses save resources in terms of benefits, office space and training. They also have the ability to contract with experts for specific projects who might be too high-priced to maintain on staff. From the perspective of the freelancer, a gig economy can improve work-life balance over what is possible in most jobs. Ideally, the model is powered by independent workers selecting jobs that they’re interested in, rather than one in which people are forced into a position where, unable to attain employment, they pick up whatever temporary gigs they can land.

In a gig economy, temporary, flexible jobs are commonplace and companies tend toward hiring independent contractors and freelancers instead of full-time employees. A gig economy undermines the traditional economy of full-time workers who rarely change positions and instead focus on a lifetime career.