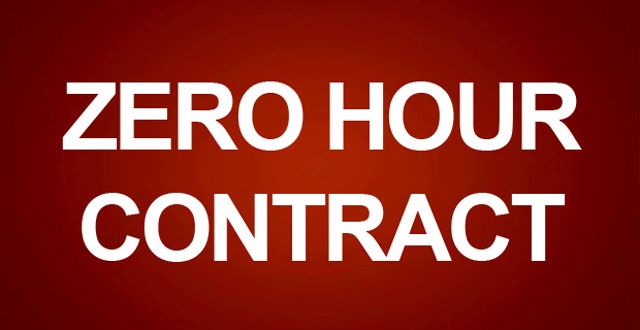 The concept of a zero hours contract (also sometimes zero hour contract) is effectively a situation which allows employers to hire staff but give them no guarantee of work. Such contracts mean that employees only work as and when required, so that they are effectively ‘on call’ to work at short notice, and only receive pay for the hours they work. Some zero hours contracts make it compulsory for workers to accept the working hours they’re offered, and others allow the employee to decide, but most contracts of this type don’t offer sick or holiday pay, and deny rights such as redundancy payments and pensions.

Predictably, the use of such contracts is controversial, not least because they give no guarantee of work, yet often deny the opportunity to seek employment elsewhere – some zero hours contracts oblige workers to seek permission before they can take on other jobs. The contracts have been criticized for not offering a basic level of financial security, many workers not being given enough hours and not having the same employment rights as those on traditional contracts. With no guaranteed income, employees on zero hours contracts sometimes find it difficult to get mortgages and other forms of credit.

People on the controversial contracts face a “precarious pay penalty” of 6.6%, or 93p an hour, the think tank has estimated.

For those who earn the least, the size of the gap is even greater, at 9.5%.

“Understanding the reasons behind this pay penalty will be crucial in order to tackle some of the challenges raised by new forms of employment, without jeopardising the success of the UK’s flexible jobs market,” it said in a statement.

Laura Gardiner, senior policy analyst at the Resolution Foundation, added that the “pay penalty” of zero-hours contracts was “a big price to pay for work that too often lacks the security workers desire”.

She said: “Zero-hours contracts have hit the headlines in recent months for their widespread use in Sports Direct and JD Sports.

“But concern about the use and abuse of zero-hours contracts goes far wider than a few notorious firms. There is mounting evidence that their use is associated with a holding down of wages.

“As new ways of working continue to grow – from [zero-hours contracts] and agency work to the gig economy and wider self-employment – we need a better understanding of how they help or hinder people’s earnings and career prospects.

“Policymakers must also tread a careful path between getting to grips with the living standards challenges thrown up by new and often insecure forms of employment, without jeopardising Britain’s recent job-creating success.”

Mathew Taylor, chief executive of the Royal Society for the Arts, has been appointed to lead a government review into how the so-called “gig” economy is affecting workers’ rights.

It will look at how new technology, combined with new business models, has led to a rise in workers doing short-term, casual work.